Residents at Weary Dunlop Retirement Village’s care centre have been warmed by the heartfelt and handmade creations of independent resident Del Gatcum.

With a cold chill starting to permeate the Melbourne air most mornings, Del said now seemed the perfect time to gift her fellow residents piles of her beautiful crocheted blankets.

“I just wanted to give them to other residents to keep them warm and as a way of reaching out to them,” Del said.

While she did not know how many blankets she had gifted, a count by care centre staff revealed 19 residents would benefit from Del’s labour of love.

“I’m not sure how long each one took, I just used to sit there at night after dinner and make them,” she said.

It was at a ‘Taking Off Pounds in Company’ club about eight years ago that she discovered her flair for crochet.

“I could knit, but I wanted to learn crochet.

“Of course, I met other ladies there who were better at it than me, so I would pal up with them and they would help.

Her skill soon caught the eyes of her neighbours at the time.

“People used to go past and say ‘Gee-whiz! Del won’t be able to get her car in the garage soon because she has got so much wool!',” Del laughed. 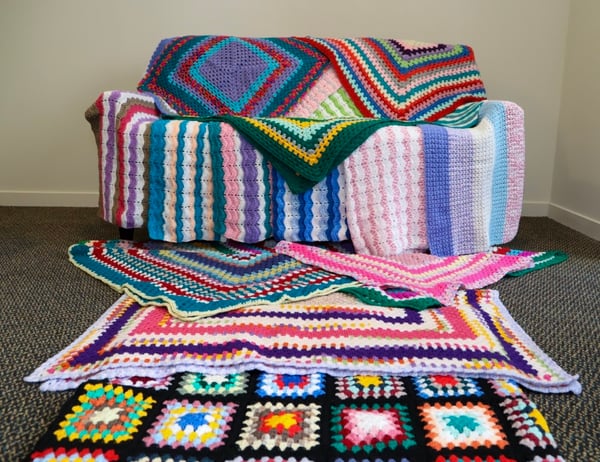 Some of Del's colourful creations.

Since moving to Weary Dunlop about a year ago, the blankets had also caught the eye of her new neighbours.

“I had so many I put them in the second room and I had them spread everywhere.

“Some of the ladies I have befriended would comment on how nice they were and because the room was chock-a-block with blankets, I have given a few away to them too.”

While she had not had “the interest” to crochet since her late husband passed away four years ago, Del said gifting the blankets to members of her new community was a fitting way to honour him.

“He would be thrilled,” she said.