Joan's drive for life cruises past a massive milestone

Written by Michael Cummings
on December 26, 2018

She lives independently in her own apartment, drives to the shops a couple times a week to pick up supplies, has someone pop in once a fortnight to help with a bit of cleaning, and keeps up an active social network of friends, family and neighbours.

Not that Joan thinks it’s remarkable. In fact, she’s struggling to see what all the fuss is about.

“People seem to treat it as though I’ve been very clever, or I’ve earned it or as though it’s an achievement, but quite honestly what have I had to do with it?”


And when a certificate from a local politician marking her milestone arrived in the mail, Joan was outright indignant.

“A certificate! As though I’ve sat an exam to be 100, I mean, I ask you. They say politicians haven’t much in the way of brains and I don’t think they have.”

Even the prospect of a congratulatory message from the Queen is met with a shrug of Joan’s shoulders.

“I know she’s a good Queen and I respect her and all that sort of business but she’s nothing to me, and I’m certainly nothing to her.”

As you can tell, Joan hasn’t lost any of her spark.

She’s fiercely independent and, despite her diminutive frame (she used to be five-foot-two and a quarter – “and woe betide anyone who left off the quarter!” - but has shrunk to five-foot even, she says) Joan is far from slowing down.

And the most precious part of her independence is parked downstairs from her apartment. 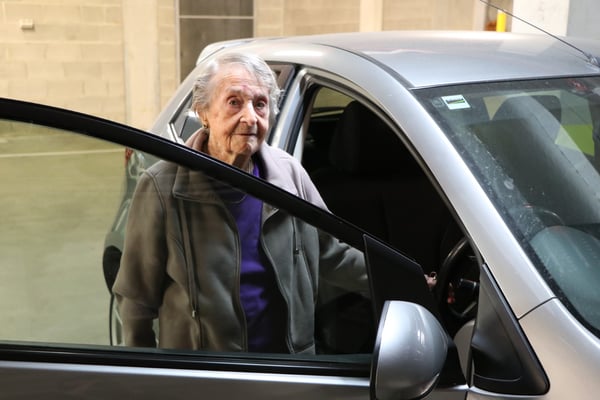 Joan with her silver Mazda 2 hatchback, which she still drives to the shops.

Yes, despite reaching three figures, Joan still loves to drive her silver Mazda hatchback to the shops and to run errands.

In fact, according to VicRoads, Joan is believed to be one of the oldest drivers in Melbourne.

The roading authority’s records show that, in a state of more than six million people, only around 60 people aged over 100 hold a valid driver’s licence. With many of those thought to be no longer actively behind the wheel, Joan is in rare company.

While the car has been sitting idle the past few months after Joan had a couple of falls, she’s raring to get back behind the wheel again soon.

A life-long car enthusiast, she was poking around car engines with her dad since she could first walk.

“I think the first words I could speak were, ‘I want to drive the car’. When I was 18 I was off. Dad taught me and he taught me thoroughly – he was good.”

Perhaps not surprisingly, Joan doesn’t view the fact she still drives as that big a deal.

“I’m very sensible. If I felt uncomfortable or not happy with myself I wouldn’t drive, but I feel perfectly at ease in the car. I’m not nervous and I’m not a mad driver.”

Born in Melbourne just days after the signing of the armistice which ended World War One, Joan has two daughters in their seventies, four grandchildren and six great-grandchildren.

She recalls the Great Depression of the 1930's, the advent of modern aviation, World War Two, and riding on steam trains on Melbourne’s fledgling suburban rail network.

Asked what technological advancement during her century on earth most stands out in her mind, though, and her answer says a lot about where her heart still lies:

"The introduction of automatic transmission in cars."