The residents were greeted with flowers, champagne, wreaths and Christmas trees when they opened the doors for the first time to their sparkling new apartments in the $160m village.

Kathleen Barr, who moved into a beautiful two-bedroom, second floor apartment with her husband Graeme, said the Christmas touches were the icing on a perfect space.

“We’ve got a magnificent view, I love the kitchen, we really couldn’t wish for anything better,” she said.

“As soon as we walked in, we both remarked that the space has a nice feel about it, everything has been done very, very well, right down to the lovely flowers.”

For fellow John Flynn pioneers Ronald (Ron) and Marian McDonald, the move to the village was a homecoming of sorts.

Having left the east Melbourne area some years ago to live in Gippsland, their new home is perfectly situated to family and friends.

“It’s just so much better being here, I feel so much happier than being 3.5 hours away,” Marian said.

As a former construction worker himself, Ron said he was excited to see the village continue to grow around him over the coming months.

“I’ve got some good work friends who are dying to come up here and have a look,” he said. 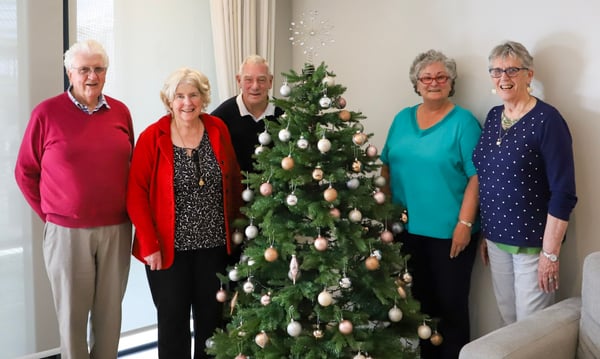 “Arriving at the village this morning and knowing we would be welcoming the first residents was something I have looked forward to since starting my role in September 2019,” she said.

“By the end of January we will have 66 residents, and I’m assuming lots of visitors too, so the sense of community and excitement will only continue to grow.”

“Lina and I are over the moon to have residents here, it's amazing. Given they have moved so close to Christmas we wanted to make it really special with the trees and decorations as they settle in,” she said.

With Ryman staff wasting no time in helping the residents unpack, plans had already been made for drinks on Ron and Marian’s balcony to toast the momentous occasion.