If Rod and Anne Goodes had all their trophies from cycling and ballroom dancing on display, their apartment at Ryman’s John Flynn Retirement Village would sparkle like a disco ball.

Instead, there are only hints of Rod’s huge achievements as an Australian cycling title holder, and Anne’s as a successful student of ballroom dancing legend Mark Wilson.

Anne completed her medal tests with ballroom heavyweight and Dancing with the Stars professional Craig Monley, who was partnered on the show with Bec Hewitt.

“For me, dancing with a good partner was like floating on cloud nine, and Rod says there is nothing like the sun on your face and the wind at your back when you’re cycling,” Anne says.

It was while dancing that Anne and Rod, who have been married for 64 years, met.

“My mum thought I should learn to dance, so I fronted up with two left feet and not much ability and I saw this vivacious young lady and she started to teach me to dance,” Rod says.

“She was very strict and kept my feet together, and I had to keep coming back.”

While Anne, 87, hung up her ornate ballroom gowns more than a decade ago, 91-year-old Rod is preparing to hit the competition cycling circuit again.

“I did something I said I would never do and parked my own race bike behind my car and of course I completely destroyed it,” Rod says.

“But I’m still a member of Cycling Australia and the Eastern Cycling Club.

“I didn’t want to spend $10,000 on another bike, because you do lose your form, but they reckon I can get the edge back and a few weeks ago they appeared here with a loan bike for me to get training again.” 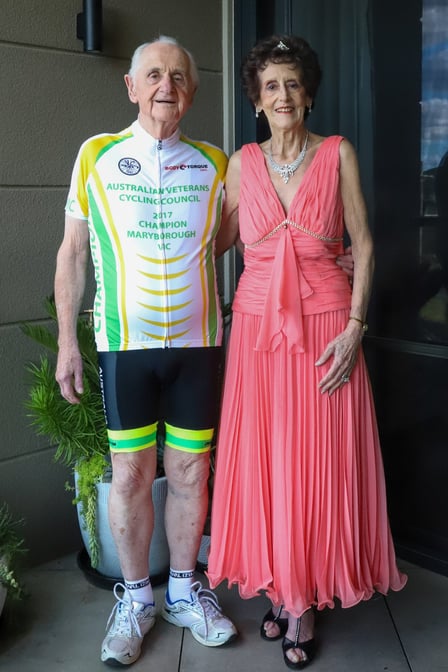 He will also compete in a 10.5km virtual cycling race during the Olympics@RYMAN.

Rod will help make history when he competes in the event which is part of the world's first international retirement village Olympics.

But he will have to juggle his training with what is turning into a busy social schedule at the village.

“We’ve formed a group and called ourselves the ‘Flynn’s Flyers’,” Anne says.

“We do things like go out for dinner together, like the other night when there were 39 of us, which was terrific.

“When new people move in, we enjoy getting to know them and inviting them to be part of the group.”

The strong sense of community at the village came as a relief to the couple, with Anne initially hesitant to move from their home in Box Hill of 63 years.

“I thought for quite a while that our place was getting too big, but Anne loved it and she was reluctant to leave, right up until we did actually,” Rod says.

“We took the Ryman contract to our solicitor and he said ‘it’s the most straightforward contract I’ve ever seen, there’s nothing hidden so if you wish to go, have no hesitation’.

“With advice from Ryman sales advisor Lina, our solicitor and our financial advisor, Anne agreed.”

“It’s a beautiful place,” she says.

“It’s just so fabulous because everyone is so nice, the staff are fabulous, the residents are fabulous, you could knock on anybody’s door and we all help each other.