Constable Thomas Lonigan is not a household name.

But Ned Kelly, the man who murdered him, is often celebrated as an outlaw hero.

The true story of the Kelly Gang, and the devastating impact they had on Const Lonigan’s family for “generations”, was told at a custody suite dedication event held at Ryman Healthcare’s Nellie Melba Retirement Village.

The event was attended by dignitaries, including Victoria Police Assistant Commissioner Glenn Weir.

Const Lonigan was ambushed, shot, and killed by Ned Kelly at Stringybark Creek on October 26, 1878. Sergeant Michael Kennedy and Constable Michael Scanlan were also murdered by the Kelly Gang that day.

“From a Victoria Police perspective, it’s really important to us that the community knows the true story about the Kelly Gang,” Snr Sgt Dean said.

“They were murderers, they were thieves, we should be honouring the police officers who risked their lives to protect their communities, not glorifying the despicable crimes of the offenders.” 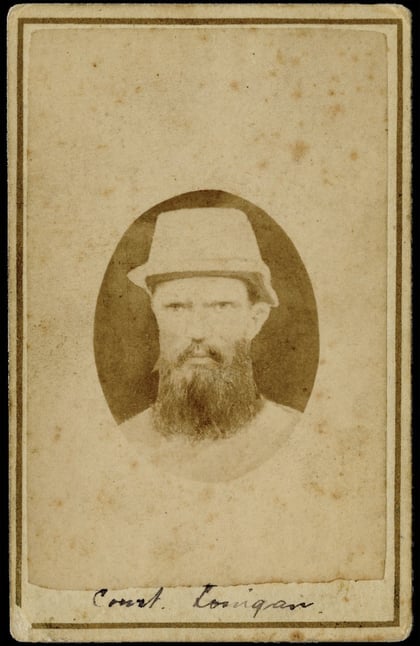 “Thomas Lonigan’s wife, Maria, was left with four children to care for at the time of his murder,” she said.

“She was actually pregnant as well, but she lost that child after the murder.”

The celebration of the Kelly Gang as folklore heroes had made the sense of injustice greater.

“People think ‘oh that’s so long ago’ and they lose perspective of the humanity and how much suffering was inflicted, and I’m just talking about one family,” Deborah said.

“It’s a huge wounding injustice for that to be forgotten when people honour criminals who caused so much suffering.”

The naming of the custody suite had been a healing experience.

“It goes a great way to setting the wrongs right,” she said.

Having spent the last 20 years of his 43-year career in the force at Glen Waverley Station, Erin Tunstall said the event honouring his great, great grandfather, was poignant.

“We’ve been to a few remembrance events before, but this one was very, very emotional, very powerful, because it was done by the police,” he said.

“The venue was superb; the whole thing just blew me away.”

In 2012 Erin accepted the Victoria Police Star on behalf of Thomas Lonigan.

The star is an award for police officers killed, or seriously injured, on or off duty.

“This partnership is an invaluable connection which will enable our residents to meet local officers and learn tips to stay safe,” Debra said.

“We were honoured to host this special event, which acknowledged the immense service and sacrifice made by Const Lonigan.”