When Nellie Melba Retirement Village’s assistant to the manager Sandy Burton travelled to Mallacoota for a holiday there was no hint the trip would end with her watching fire destroy everything in sight.

For the past 16 years Sandy and her family have spent two weeks over the Christmas break holidaying at the seaside town.

Last year the holiday was destined to be particularly memorable with Sandy’s daughter Chelsea celebrating her 23rd birthday on New Year’s Eve, and her son Mackenzie, accompanied by 11 friends, to help celebrate his 18th birthday on the same day.

But, as dawn broke in Mallacoota on December 30, 2019, the holiday became memorable for all the wrong reasons.

“Toward lunch I picked up something was going on, so we packed everything, including my wine, and put it into the cars,” Sandy says.

By the time the cars were packed emergency ‘evacuate now’ warnings started flooding the group’s phones.

With the chaos of fire yet to descend, Sandy and the youngsters headed to the town’s cinema, which they had been told was a designated shelter centre.

The cinema was near empty, and dark, so they left.

A member of the CFA instructed them to put on long-sleeved tops and pants in preparation for ember rain.

Charged with the responsibility of not only ensuring her own children were safe, but also 11 others, Sandy decided to get the group to swim “about 15 metres” across a lake to a stretch of sand, far from where fire might arrive.

“By the time night fell we were all dried, but it was icy cold, windy and smoky.”

With only towels to keep warm, and no food, the group relied on the kindness of strangers in boats who gave them bottles of water and a bag of chips to get through the night.

When day broke on her children’s birthdays, the horror of fire had not arrived.

“We think it might have missed us because we were told it would come at 2am.

“But by 8am it was pitch black, the sky was red, sirens were going off everywhere.

“The smoke was terrible, you couldn’t put your head out.”

Sandy does not know how long the fire went on for.

“It was so dark you lost your bearings.

“We couldn’t figure out what was burning, we thought we were watching everything burn, including the cinema, which was being used as an evacuation point.”

Hours later, with the help of "some wonderful people with boats" who helped them avoid swimming in the ash-filled water, Sandy and the group returned to their cars where they passed presents out of the windows to her children. 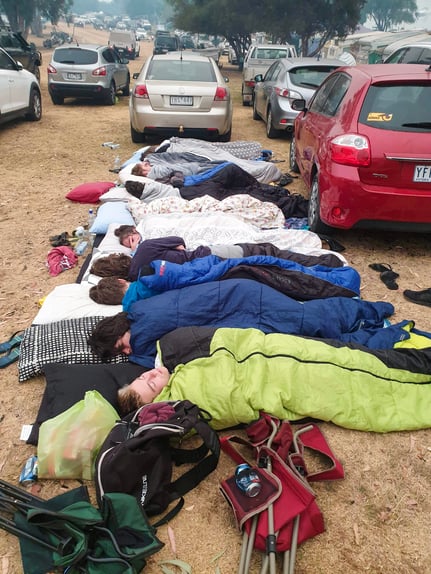 Sandy's group attempt to sleep following the fire in Mallacoota.

Hearing it was his 18th birthday, a group of men passed Mackenzie a beer, which he drank in the eerie aftermath of the blaze.

Again, with no where to stay, the group slept in a paddock before returning to the caravan park where their tents were the next day.

“We walked to the caravan park and when we got to it, we could see the front of it all burnt, and everything behind it was fine,” Sandy says.

“It was sad because I’d seen homes gone, but my tent was still standing.”

A charred caravan park in Mallacoota.

24 hours later the group, and about 1000 others, were evacuated on an Australian Navy Boat.

“The crew were amazing, I couldn’t fault them."

It would be another three weeks before Sandy could return to the scorched holiday spot to retrieve her car.

During this time she got stuck into work and used a Ryman Healthcare loan car.

“I came back to work early.

“I needed to get my brain working again, otherwise I was constantly thinking about what had happened.

While Sandy was eager to return to Mallacoota to “get a bit of closure”, she says the spot, which has been the location of many family memories, looked “terrible”.

“It was just black sticks and melted guard rails.”

In what can only be described as a frightening coincidence, two days after Sandy and her children returned to Melbourne, Sandy’s son Darcy and his father Rod survived a yacht fire in the Maldives.

The pair and a friend swam 100m to another yacht in the middle of the night as their vessel sank.

Once he had convinced Sandy they were fine, Darcy explained “if dad didn’t wake up, we’d be dead”.

Sandy says while her family, like thousands of others in Australia this summer, have had enough frightening experiences with fire, they will continue to holiday at Mallacoota.