Sea change 'everything I hoped it would be'

From being a psychologist in the Victorian Department of Education to developing a global training curriculum for managers at telecommunications company Ericsson in Sweden, to establishing her own management consulting company.

Now, a sea change from Melbourne to Ryman’s Ocean Grove village has enabled her to embark on her latest adventure.

“I’d had a couple of friends move into retirement villages, and during lockdown in 2020 it got me thinking about whether at some stage that would be the right move for me,” Rosemary said.

“At the same time, in my mind, I had a growing sense of wanting a sea change and a new adventure.”

As a single woman without children Rosemary was mindful of the need to have support around her should her health needs change.

“Lockdown last year really forced me to consider what life might be like if down the track if I was unable to drive, or if I couldn’t get out of the house because of limited mobility,” she said.

“When I started looking into what Ryman was doing, I found that Ryman ticked a lot of my boxes.

“First of all, it provided all the levels of care, and that was so important to me being on my own.”

Rosemary was so impressed with Ryman’s Bellarine offering, a visit to view the village’s Shell Rd site turned into a contract signing.

“I felt the universe intervened because on the day I visited the Ryman Ocean Grove office, one of the villas I liked, but which had been on hold, was now available,” she said.

“It was as though it was meant to be, so I ended up signing the contract that day!

“It was pretty exciting and it felt right.”

The decision to join the village was a particularly big one for Rosemary because it meant she had to leave Melbourne.

“I was leaving quite an extensive friend network and my much-loved little place in Viewbank which I’d lived in for 22 years,” she said.

When she walked into her two-bedroom villa at the village she instantly knew she had made the right decision.

“The sun was streaming into the living area and there was just this feeling of ‘Oh my goodness, isn’t this lovely’,” she said. 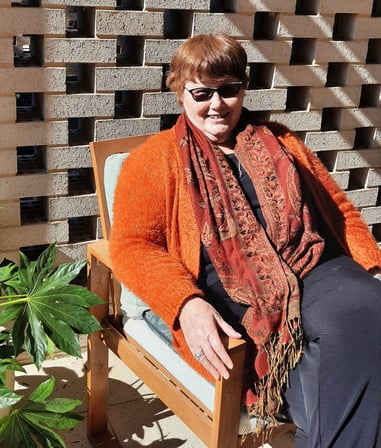 “And it really has been everything I hoped it would be.”

Rosemary said she felt even happier to call the village home when its name was announced at a special ceremony in July.

“Perhaps for some people the village name isn’t critical, but to me it matters,” she said.

“I wanted it to be named after a woman, but I had not dared even hope it would be an Indigenous woman.

“And of course, when it was Deborah Cheetham, I was just over the moon because as well as being a magnificent opera singer, she is also a wonderful advocate for the Indigenous community.

“In her speech Deborah made a comment to the effect that she needed to feel comfortable that Ryman was a company that she could form a relationship with and which had “heart”; she obviously feels comfortable with that and that's been my experience too.

“It matters to me that I am involved with a company that is a good corporate citizen.”

Many of Rosemary’s neighbours at the village have lived in Ocean Grove for years and have welcomed her to the area with open arms.

“People have been very quick to offer help and tips and I’m thoroughly enjoying starting to explore the Bellarine,” she said.

“It’s a beautiful part of the world, and I am so glad I made the decision to live here.

“The move has been a very positive experience and I am very grateful to Ryman and the people at the village for that.”