Wherever loved Australian cook and Weary Dunlop Retirement Village resident Elise Pascoe goes so too does her hunger for good food and good company.

Just decades after discovering her passion for cooking while hosting a dinner party for her fourteenth birthday, Elise’s trajectory in the international culinary world secured her a place in the teaching and dining rooms “of the masters”, including Julia Child.

Now, a lucky teddy has found himself the ‘Guest of Honour’ at her dining table.

Chefy, who wears a chef's hat and jacket, has lived at the village with Elise for five years.

Since COVID-19 social distancing rules stopped her having meals and catch ups with friends at the village, ‘Chefy’ had offered a good excuse to set the table and get creative, Elise said.

“My freezer is full of Soffritto (onions, carrots, celery) cooked to add to dishes such as lamb shanks, beef cheeks, oxtail, etcetera.

“I had a lot of carrots, so I made carrot soup.

“I’ve made stock, I’ve made curried chicken, I’ve also made Italian meatballs, I’ve made salsa di pomadoro (tomato sauce) that I might add black olives to one day.”

Chefy had already starred in one teddy bear’s picnic photo shoot at the table, and she was not ruling out a “photo series” of the bear’s isolation dinners.

“He was given to me by one of the people who worked for me in the cooking school and then became a very dear friend.

“He likes pasta but he makes a terrible mess, and little Risoni type pasta is better for bears,” she laughed. 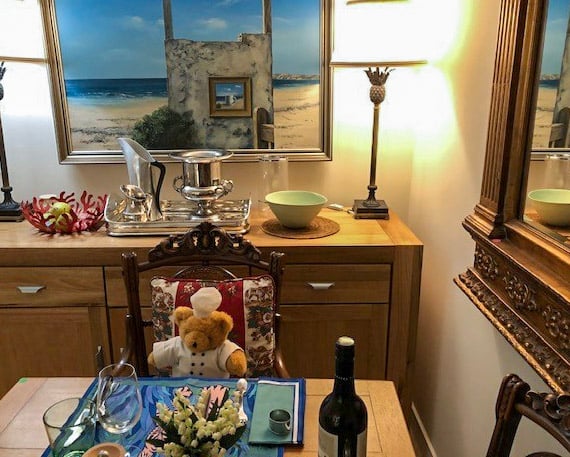 Chefy the bear prepares for a picnic made by Elise.

It was during experiences like cooking live on American television in front of millions of viewers as the Fresh Australian Range Lamb ambassador, and in weekly cooking segments on Network 10, that Elise discovered her passion for teaching.

“I love teaching, and I love demonstrating my knowledge and passion.

“That was really important.”

Elise shared her expertise, first gained at the Gritti Palace in Venice, and honed in luxury kitchens across the world, in her ‘Good Living’ column in the Sydney Morning Herald for 10 years, and at her international cooking schools in Victoria and NSW.

Her reputation as the Australian authority on French cooking earned her the title ‘The Julia Child of Australia’ - something she said she still feels uncomfortable about.

“I rang her up one day when in Boston and said ‘Julia, I’m so embarrassed about the American press putting you with me.

Learning from masters like Julia Child was “so special”, she said.

“I enrolled in a three week cooking course at the Gritti Palace in Venice in 1976.

"Julia Child was teaching there during the summer along with Anne Willan (La Varenne) and Simone (Simca) Beck.

"Each morning I was first in class, sitting in the front row.

"After several days Julia asked me if I would like to help with the 'mise en place' (prep), which was such an honour.

"Julia and her husband Paul even had me stay with them at their summer house in the south of France."

It was after her illustrious career that Elise and her late husband John embarked on their greatest adventure - A year in Italy.

“Having that freedom after years and years of having careers, working for ourselves, and then suddenly you are free to do whatever you want…

“It was a very special time in my life.”

While she no longer feels she has the time, nor energy, to cook “fiddly things”, good food and good company, be that of Julia Child or ‘Chefy’, are still important.

“I just want food to be very well cooked, using fresh and seasonal ingredients, and shared with love and care and knowledge,” she said.