'The Girls' at Ocean Grove

When Anna and Lyn Carey-Nicholson made history as the first same sex couple to get married in Ocean Grove, theirs had already been a love more than 30 years in the making.

The Ryman Healthcare Ocean Grove village residents, who are affectionately known to many as 'The Girls', were wed by Lyn’s nephew, Mark Carey, on February 2, 2018.

“During the ceremony, Mark read our history as a couple, and when he read the part about the time we had to wait to make our relationship public and legal he became emotional,” Anna says. 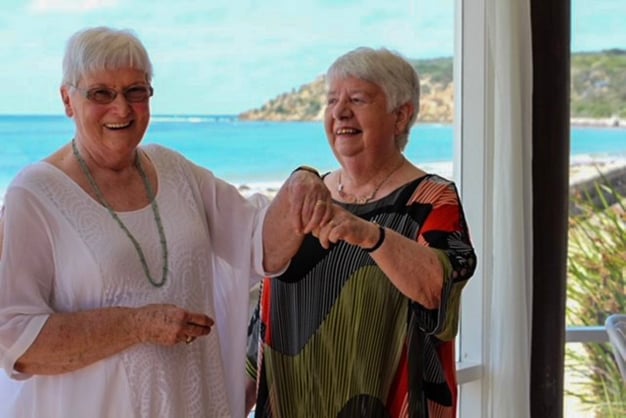 Anna and Lyn attended Geelong High School in the 1950s. Later, when Lyn was working as a dental nurse receptionist, and Anna was still a student, they often chatted before and after Anna’s dental treatments.

When Anna qualified as a teacher, one of her first appointments was at Portarlington, where the head teacher of the school happened to be Lyn’s father.

“There were a lot of places where we bumped into each other,” Anna says.

While there was a sense of “some recognition of feeling” between the two, they lived separate lives for many years.

“My father was an elder in the Uniting Church, so I felt guilty,” Lyn says.

“I thought there must be something wrong with me to have these feelings, so I pushed them down.

"But that doesn’t make you too happy.”

Lyn was married to a man for seven years, before winning the ABC Concerto and Vocal Competition, and moving to England in 1965 to pursue a singing career. She did not return to Australia until 1976.

Anna threw herself into life as a teacher in Geelong.

When they reconnected through mutual friends in their fifties the spark was stronger than ever.

“But we were just friends as far as everyone else was concerned,” Anna says.

When Lyn had a health scare in the early 1990s the need to live together as a couple spurred them to build a house at Ocean Grove.

‘The Girls’ quickly became part of the community with their willingness to accept people and institutions who may not be accepting of their relationship.

They say this tolerance was largely reciprocated.

“In 1999 we felt we needed a church community, and we wandered into St Peter’s, the Anglican church, and the welcomer that day was a friend from the golf club who was delighted to see us,” Anna says.

“Nobody at the golf club asked if we were a couple and then nobody at the church asked about our relationship, and we didn’t say anything because we thought it may be embarrassing for the clergy persons, who by church tradition had to maintain a different standard."

Eighteen years later, on November 15, 2017, Anna and Lyn were at a Probus meeting when Australia voted ‘yes’ to same-sex marriage.

“One of the ladies came in and said ‘Stop! The decision is… Yes!," Anna says.

“Everyone cheered, we hadn’t said anything about us, and yet they just knew.”

As soon as they could Anna and Lyn lodged a Notice of Intended Marriage.

On the day, despite being surrounded by friends and family, Anna and Lyn recall having white knuckles as they gripped hands. 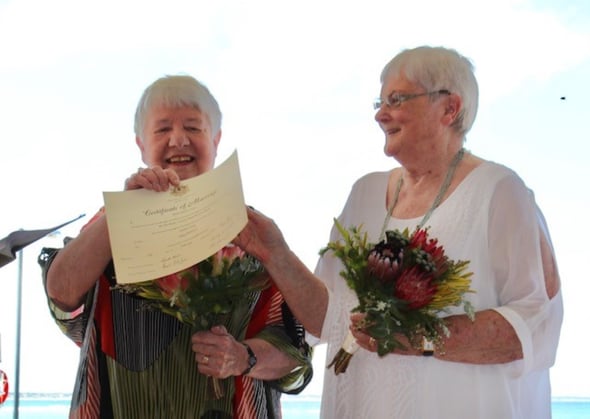 “We were worried about what people were thinking,” Anna says.

“We were the first same-sex couple for the florist and the first for the venue,” Lyn says.

Things have been different ever since.

“Before we always felt we were hiding something, and people weren’t prepared to talk to us about it,” Anna says.

“People are now more open about it with us because we’re more open, we’re not trying to disguise anything, we are who we are,” Lyn says.

After decades of love and three years of marriage, Lyn and Anna are now enjoying a new chapter in their lives at Ryman’s Ocean Grove village.

“Moving in here people asked, ‘are you sisters?’,” Lyn says.

“And not one person has even raised an eyebrow,” Lyn says.

Anna (left) and Lyn discuss life at the Ryman village during a public meeting as Ryman sales advisor Janine Wilde looks on.

Now in their eighties, Lyn and Anna only wish their love could have been recognised sooner.

"It’s sad to think that it’s taken that long for Australia to come to this decision,” Lyn says.

Growing up, neither Anna or Lyn knew of any same-sex couples, and they can’t recall having any gay role models.

As they enjoy life as a couple in a community that has welcomed them, they hope young people discovering their sexuality will be embraced by society in the same way.