The fitness program is an immensely popular weekly activity for residents at Ryman’s other villages, and John Flynn proved no different.

Village Triple A instructor Joelle Careedy said the exercises-called Triple A-to stand for ageless, active and aware-were designed for people of all abilities with a focus on improving agility, balance, flexibility, and strength.

“I think the first classes went extremely well, and the feedback I have heard from the residents has been great,” she said.

“I’m looking forward to seeing the ability and confidence of residents grow as they keep coming back.”

A soundtrack of eclectic music had some residents singing along and all tapping their toes, stretching, marching, and using resistance bands to complete core exercises.

The functional fitness classes were conducted sitting down, however a standing class will be offered to residents wanting to push themselves that little bit more.

Clem and Ida Robinson do high leg stretches during the Triple A launch.

John Flynn Retirement Village resident Lyn Ryan said she had been considering a return to her local gym, however she was now a Triple A convert.

“I’m sticking with this,” she said.

“It was just fantastic; Joelle was so well organised, and I feel I’ve worked every part of my body.” 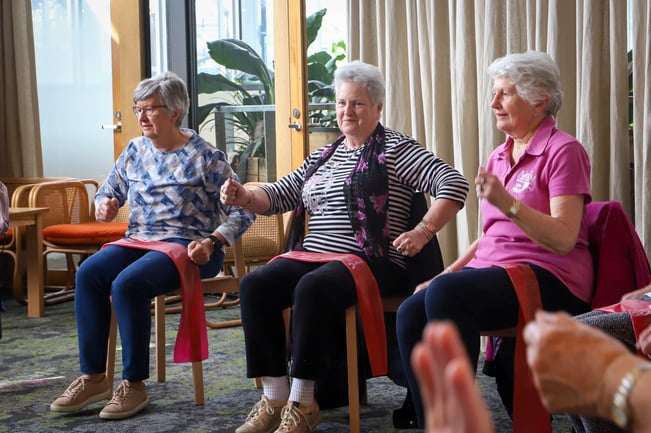 Residents (from left) Libby Cavagna, Val Dyke and Lyn Ryan get into the swing of things.

Some residents enjoyed the first class so much they passed up the offer of a complimentary coffee to attend back to back sessions.

Resident Val Stephen said the class was unlike anything she had done before.

“I’ve never done any exercise classes or the gym before, but I’ve always been into sport,” she said.

“I think I’ll keep doing these classes because I can tell already it will be good for my fitness and strength.”