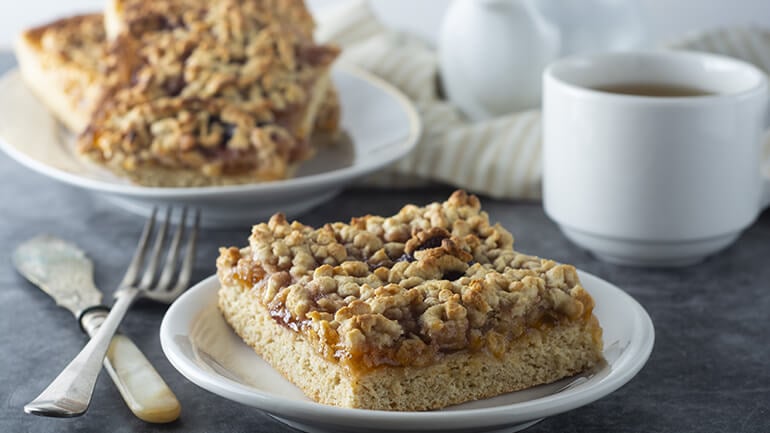 This delightful feijoa slice is a fantastic post-dinner treat or afternoon tea snack. Quick and easy, it’s made with a hearty oaty base, feijoa filling, and crumble top. Ideally suited to cooling temperatures, it can be served warm or cold.

Method
1. Preheat an oven to 180⁰C and line a 20cm square baking tin with baking paper. Set aside.
2. Mix the flour, oats, cinnamon, baking powder and salt in a bowl. Set aside.
3. In a separate bowl, beat the butter and brown sugar together at medium speed until light and fluffy.      Add the egg and vanilla and beat again until well mixed.
4. Add the dry ingredients to the butter mixture and mix gently at low speed until the mixture comes        together.
5. Add 3/4 of the base mix to the baking tin. Set aside the remaining quarter for later.
6. Press the mixture firmly into the tin with your hands or a mixing spoon.
7. Bake for 12-15 minutes. The base should just be starting to turn golden brown around the edges.
8. While the base is baking, prepare the filling. Add all the filling ingredients to a bowl and mix well.
9. When the based is cooked, remove it from the oven and immediately pour the feijoa filling over top,       spreading the filling evenly.
10. Take the remaining dough that you set aside earlier and roughly crumble it over the top of the                feijoa filling.
11. Put the slice back in the oven for another 20 minutes. When the crumble is starting to turn golden          brown on top it’s ready.

This versatile slice can be a dessert or a tasty snack. Serve it while still warm with a scoop of ice-cream for a sweet treat after dinner or let it cool before storing it in the fridge for on-demand snacking.

Where to find autumn colour in Victoria