Gather those you love and bring your mid-winter Christmas to life with a succulent, delicious feast. For a spread that will warm bodies and soothe souls, position a glazed ham in the centre of the table and surround it with duck fat potatoes, stuffing, gravy, and Brussels sprouts with a bacon twist. Bon appétit! 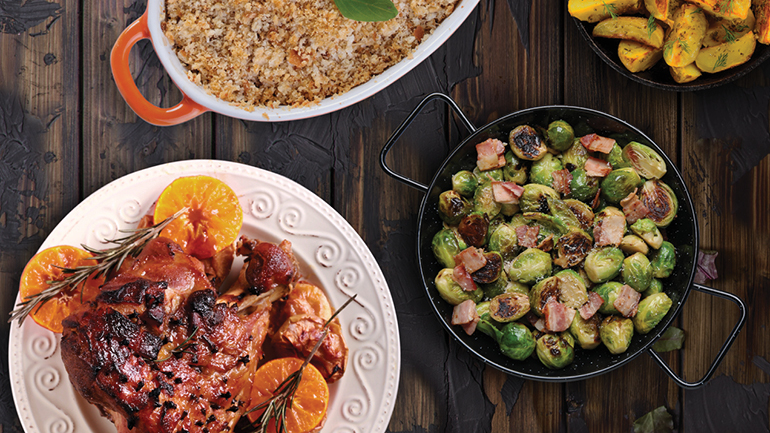 2. Remove the skin (rind) by cutting around the shank. Push your fingers between the skin and layer of fat and then peel the skin off. Ensure you leave the layer of fat on as this keeps the ham moist and creates a delicious crispy coating for your glaze. Discard the skin.

3. Using a sharp knife, lightly score a diamond pattern all over the surface.

4. Insert a clove into the cross section of each diamond shape.

5. Wrap tin foil around the hock (bone end) to stop it burning. Place the ham in a roasting dish, add water to the base and place in the oven for 20 minutes.

6. While the ham is cooking, prepare your glaze ingredients: place brown sugar, honey and Dijon mustard in a saucepan and cook on low heat until the sugar dissolves. Remove from heat and stir through the brandy or pineapple juice.

7. It’s time to glaze, glaze, glaze! Once the ham has cooked for 20 minutes, remove from the oven and brush a generous portion of glaze all over. To achieve a really delicious, caramelised top, you’ll need to re-glaze throughout cooking. I promise it’ll be worth it!

9. Re-glaze and cook for a final 20 - 30 minutes until the ham is caramelised and golden. You can remove the sheet of tin foil during this final cooking period.

10. Remove from the oven and allow to rest for about 15 minutes.

1. Bring a pot of water to the boil and drop in the sprouts. Boil for 3 minutes then pour the spouts into a sieve. To cool, pour cold water over them.

2. Melt the butter in a frypan over medium heat. Add bacon and cook for 5 minutes or until the bacon
fat begins to run.

3. Add onion and cook for another 5 minutes. Increase the heat to high and add the sprouts. Stir-fry for 5 minutes until tender and starting to caramelise. Add lemon juice, season with salt and pepper, then toss. Sprinkle parsley over the top and serve hot.

2. Melt butter in a large pan over medium heat. Add ground sage, celery, and onions and cook over medium-low for 10 minutes or until tender. Remove before the mixture browns.

3. Place bread cubes in a bowl. Add the celery mixture and fresh herbs. Pour broth over the mixture, add salt and pepper, then combine. The bread should be moist, not soggy.

4. Transfer to an oven dish and dot with extra butter. Bake covered for 35 minutes then uncovered for 10 minutes.

Top tips for a garden that's small but beautifully farmed