The art of letter writing 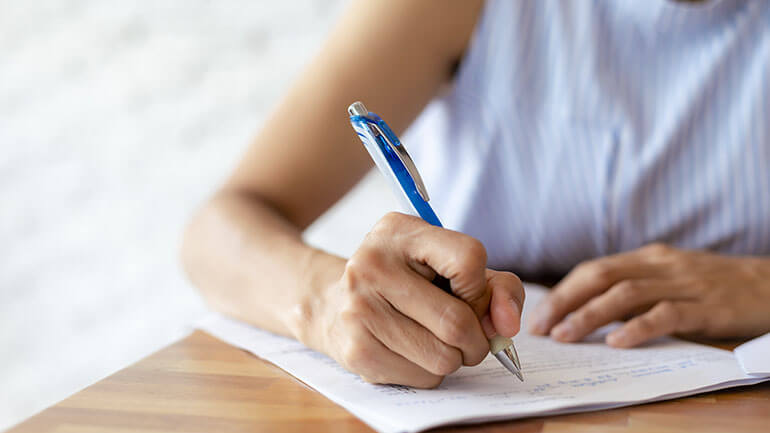 There’s something timeless about letter-writing. The written letter has long been an essential form of communication around the world.

The art of letter writing

There’s something timeless about letter-writing. The written letter has long been an essential form of communication around the world. Even as computers and the internet have overtaken the physical letter, being able to write a great letter is of value. And there’s nothing like opening the mailbox to see something other than advertising and bills.

The personal touch
A handwritten or typed letter often feels more meaningful than a text message or email. Putting your thoughts and well-wishes onto paper is a thoughtful way to connect with someone on a personal level. It shows that you have taken time to craft your words and carefully consider them in your communication. It’s also an opportunity for quiet, calm, and self-reflection. An experience that many people who enjoy journaling for mindfulness do daily. In a world where digital communication reigns, writing and receiving tangible letters is a rare and special opportunity for connection.

A handwritten history
For hundreds of years, the only way people could communicate with one other across large distances was through letters. Beginning around 500 BC, the first recorded handwritten letter was sent by the Persian Queen Atossa. Rulers of nations of the ancient world were separated by great distances and used letters as a way to communicate with each other. Found in Egypt in 1887, a collection of documents confirmed early correspondence between rulers in the Middle East and Egyptian pharaohs. At the time, many materials were used to write letters on, including pottery fragments, animal skin, metal, and papyrus.

When papyrus was hard to come by, further creativity was applied when it came to writing materials. In the dark ages, Saxons wrote on the bark of the beech tree, called boc, which is where the word book originates from. Eventually, papers were created using cotton and linen throughout the 12th - 14th century. This was the beginning of the paper we use now.

Around the mid-1800s national postal delivery services emerged. This marked the beginning of the post as we now know it, with nationwide delivery and stamps. Many letters written by notable people have been collected, protected, researched, and presented to the public. They have provided valuable insight into their lives and as an autobiographical style of literature.

The times, they are a-changing
Letters remained a primary form of communication internationally until the telegraph. Long-distance communication was changed forever. It became easier and more efficient. Letter writing has continued to diminish in popularity as new technologies have continually made communication faster and easier.

What used to be a practical necessity has become a romanticized form of communication. Movies are written about love letters, people often write letters or keep handwritten journals in TV shows, and typewriters are the tool of choice for those with writer’s block who have escaped to the countryside to complete a novel. While letter writing use has dropped, its presence in popular culture has increased when communicating deep connection, reflection, and romance.

Writing a letter
From personal letters that keep friends and family updated to love letters to journal entries, they all follow a similar format. Strict formal letter writing guidelines are increasingly being left in the past and a more relaxed approach has been adopted to letter structure. But there are a few important things that you still need to consider when writing a letter.

Date – This is vital for any handwritten letter. You can use any format you like but be sure to include the year. If the letter is found again 10 years later, whoever found it will want to know which year the letter was written in. Especially if your letter is destined to be a historical document!

Greeting – How you say hello depends on your familiarity with the person you’re writing to. A simple ‘Hello,’ is acceptable for an acquaintance. You might write ‘Hi’ to a close friend or family member. Or ‘Dear,’ for more formal situations. If you don’t know who you’re writing to, ‘To whom it may concern,’ is still widely used.

Body – It helps to tell the recipient why you’re writing to them early on. This will provide them with context for the remainder of the letter. It will also help them focus on the purpose of your communication.

The structure of the body of your letter should be clear and well thought out. It pays to jot down your key points and logically organize them before beginning. This will help your letter make sense and be easy to understand as opposed to a long list of intermingled topics.

Signature – Your sign off is similar to your greeting. It is equally dependent on your relationship and familiarity with the recipient. ‘With love,’ is appropriate for family and close friends. ‘Kind Regards,’ suits a more formal letter. And ‘Best Wishes,’ is tailor-made for farewells or well-wishing communications. Informal letters can sign off in any way. ‘Thinking of you.’ is a thoughtful sign off for someone loved while ‘Cheers’ and ‘Bye for now’ suit family and friends.

Aside from sending a letter to somebody to say hello, there are other, more specific, reasons you might send a letter. Letters of thanks, congratulations, condolence, or a letter to the editor might compel you to pick up a pen and paper. You might write a letter to let someone know what you have been up to or to tell them how special they are to you. Or even write a letter to yourself. Perhaps the best letter of them all, this is a chance for reflection and to record your thoughts and feelings.

With so many instant methods of communication available to us, it’s easy to dismiss the importance of letter writing. But the personal touch of a handwritten letter is unmatched, and there’s nothing quite like the excitement of receiving a personal letter in the mail.

The importance of SPF sunscreen